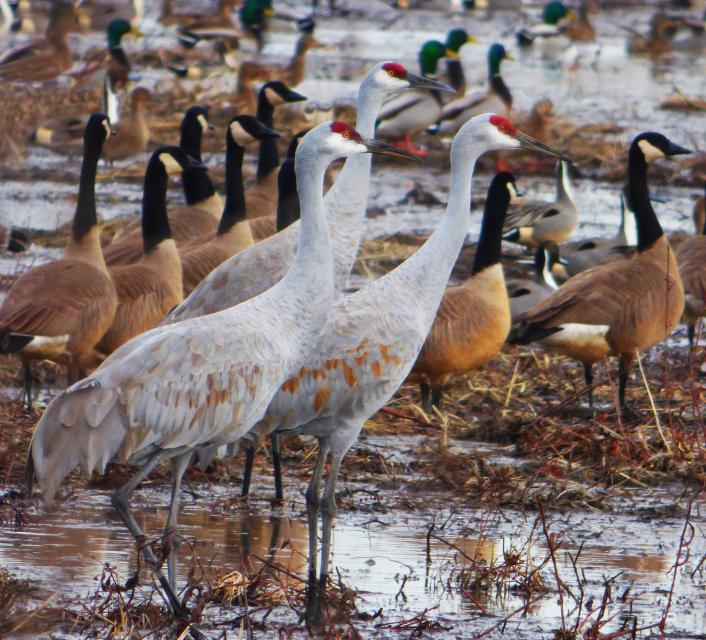 On Tuesday, January 3, 2017, seven Bufferlands staff including intern Taylor Thomas, three volunteers (GariRae Gray, Ian Baldwin, and Jennilea Londre) and our Regional San scientists, Lisa Thompson and Timothy Mussen, participated in the 22nd Rio Cosumnes Christmas Bird Count (CBC) on a wet and windy day, with increasing rain and wind as the day wore on. With six teams in the field, even with some weather-related access difficulty, we covered the property very well. The Bufferlands is at the northern portion of the 15-mile diameter CBC circle that includes the Stone Lakes National Wildlife Refuge, Cosumnes River Preserve, western Elk Grove, northwestern Galt, and a portion of Merritt Island in Yolo County.

From 7:05 am to 5:20 pm, we recorded 110 species on the Bufferlands, within an historic range of 90 to 120. We counted 88,049 individual birds, within an historic range of 7,723 to 811,644. In 2002 we began covering Beach Lake Forest, Beach Lake Park, and the ag lands owned by the District on the west side of I-5 in our area count. Since that time we have recorded an average of 112 species, within a range of 104 to 120. A slightly below average species count (since 2002) is probably more a reflection of poor weather than any other factor. With the increasingly poor conditions, many teams finished early and the count-wide compilation was canceled for the evening of the count. The Bufferlands portion has recorded 160 species over the count’s 22 years, and a male Barrow’s Goldeneye was new for our area on count day. Numbers of some common species were well below average, again likely a result of poor weather conditions.

We did well with geese and swans, recording all of the expected species except for Ross’s Goose. With ducks, we were mostly below average, despite a lot of available water. We did have good numbers of Ring-necked Ducks (642), only six Canvasbacks, and 13 Hooded Mergansers (recorded on 10 of 22 counts, but also 10 of the past 11 counts). Wild Turkey numbers continue to grow, with 273 almost 100 above last year’s then record number. In contrast, Ring-necked Pheasants are exhibiting a region-wide decline, and our seven were well below the historic average of 62.  We found three American Bitterns, which have been missed three times, and also found three Green Herons, which have been missed seven times. We missed Black-crowned Night-Herons for just the sixth time, but for six out of the last nine years; this species had regularly roosted at Nicolaus Pond, which is no longer consistently flooded. Most raptor numbers were about average, and a Swainson’s Hawk, normally absent in winter, was recorded for just the fourth time on the Bufferlands portion of the CBC. Even with rainy and windy conditions, we were able to record five Burrowing Owls, two Merlins, and a Prairie Falcon. We recorded 24 Sandhill Cranes; it was the fourth year in a row and the eighth of the last ten years that this species has been found on the property.  Rail numbers were low (probably weather-related), with only two Virginia Rails and four Sora, as well as just one Common Gallinule; gone are the days when we expect to find 30 or more gallinules.

Shorebird numbers were low, and we missed Black-bellied Plover (for the 13th time) and Dunlin for just the fifth time. Two Long-billed Curlews were a nice surprise for a species that has become somewhat rare on the property. We found one Spotted Sandpiper, which is a regular species at the Wastewater Treatment Plant, but difficult to find in the rest of the count circle. No uncommon gulls or any terns were recorded. We missed White-throated Swifts as we do about half the time.

Two species that have declined since 2005 when West Nile Virus arrived in our area, Yellow-billed Magpie (38 this year) and Loggerhead Shrike (just two this year), showed no clear change in the recent trends, although magpie numbers were up from just 13 last year, but below their previous average. We missed Oak Titmouse, another species that appears to be susceptible to WNV, for the sixth year in a row. Four Common Ravens (only our fourth record at the Bufferlands on a CBC, but for the fourth year in a row) reflects the continued expansion of this species in the Central Valley; ten years ago this was a rare bird in most of Sacramento County.

Numbers of individual grassland and riparian songbirds were down on count day, likely mostly a result of the weather. While most of these birds must forage everyday even in rain and wind, they are much less conspicuous in poor weather and don’t perch in the open for long. As a result, Savannah Sparrows (27) were at a record low and only 20% of average. White-crowned Sparrows were at just 60% of average. Thirty-five Horned Larks were a nice surprise after missing them for six out of the last eight years. A new low of only three Marsh Wrens was surely weather, and to some extent, access-related. Lesser Goldfinch numbers have been increasing in recent years, and we had a new high of 159 on this count, while American Goldfinches (62) were at only at only 56% of the 22-year average.

We recorded 70,000 European Starlings, 9,500 Brewer’s Blackbirds, and 500 Brown-headed Cowbirds. The only species missed on count day but seen count week was Great-tailed Grackle. Wrapping up, we missed Rock Wren (recorded about half the time), found only one Golden-crowned Kinglet (less abundant than usual in the Central Valley this season), missed Varied Thrush (mostly absent from the Central Valley this season), missed Cedar Waxwing (as we do more than half the time), found six Orange-crowned Warblers, and one Pacific Wren (which we find only 1/3 of the time).