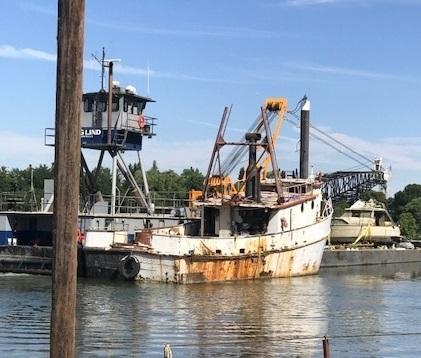 Confluence Program funding recently played a pivotal part in the removal of a derelict vessel that had been abandoned on the Sacramento River. Here’s the story: The Saint Joseph, a 50-year-old shrimp boat that had been sold for scrap years ago, was ditched illegally on the west side of the Sacramento River in West Sacramento. At one point, homeless were residing on the vessel, resulting in its eventual condemnation.

In July 2017, someone cut the vessel loose from the dock where it was moored, sending it floating down the Sacramento River unattended. The runaway boat created a potentially hazardous situation that required authorities to commandeer the vessel, after which private citizens towed it to the closest dock, Stan’s Marina, south of Clarksburg. Yolo County Supervisor Oscar Villegas, who serves on the Regional San Board of Directors, then began to reach out to multiple agencies for assistance and funding support to remove the vessel from the river permanently.

Ultimately, Director Villegas and the Yolo County Sheriff’s Office were able to secure enough funding through both the Confluence Program and the California Division of Boating and Waterways to finance the safe removal of the Saint Joseph. In July 2018, the vessel was moved to its final destination of Bethel Island to be destroyed and recycled.

The Saint Joseph success story is a perfect example of how Confluence funding is helping our communities. “This saga has renewed my faith in public service collaboration and inspired my commitment to keeping our waterways safe and clean,” said Director Villegas.