This section explains some of the history and dynamics of mercury pollution in the Central Valley, including the lasting effects of our gold mining legacy, the behavior of mercury in our environment, and Regional San’s active involvement in mercury control efforts.

Mercury was mined from the northern California coastal range to be used primarily in hydraulic gold mining in the Sierra Nevada, as well as in dredge tailings operations. There were more than 239 known mercury mines, which produced an estimated 227 million pounds of mercury from the early 1850s through 1981. 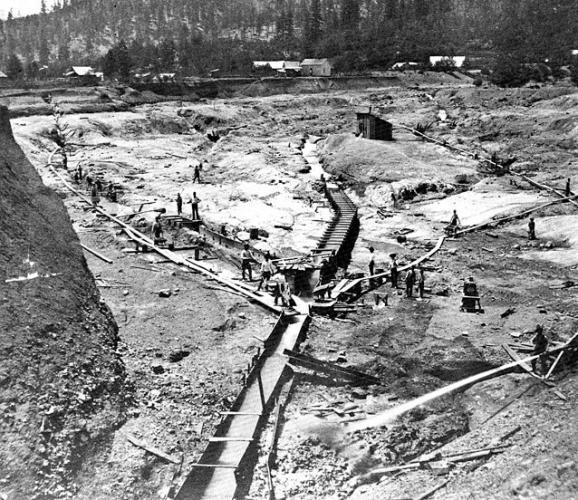 It is estimated that 1.6 billion cubic yards of landscape were hydraulically mined in the Sierra Nevada mountains. Another 3.9 billion cubic yards of the landscape were affected by dredging operations.The destructive environmental impacts of these gold mining operations were profound and far reaching. An estimated 8 million pounds of mercury was lost to the environment. The mining process stripped landscapes and clogged drainage ways with sediment and debris, affecting rivers and major transportation routes, burying agricultural land in the valleys, and causing major flooding in Sacramento and Yuba City.

The Behavior of Mercury in Our Environment

The behavior of mercury in our environment is complex. Mercury in the environment is being studied by many scientists throughout the country and in California and the Sacramento River Delta. At this point in time, however, not enough is known about the factors that control mercury transformation and bioaccumulation. (More information on the state of knowledge regarding mercury behavior in the environment can be found on the CalFed Mercury Science Project website.)

What is known at this time is that the entire Lower Sacramento River region is impaired due to the high mercury concentrations in fish. Here is a simplified diagram showing the connection between sources of mercury and fish that are consumed by humans and wildlife. An important step in this process is the transformation of mercury into methylmercury, the more dangerous organic form of mercury, which accumulates in fish tissue.

Disrupting the connection process at any point along the path can reduce the risk of mercury exposure to humans and wildlife. What this means is that reducing mercury concentrations in our wastewater, for example, will result in less mercury being released to water bodies, and therefore, less mercury accumulating in fish and the food chain above them.

Regional San’s involvement in mercury issues began with our 1990 National Pollutant Discharge Elimination System (NPDES) permit from the Central Valley Regional Water Quality Control Board (Regional Water Board), which is tasked with addressing water quality issues in the majority of inland Northern California. There was very little mercury data for the Sacramento River at that time, and Regional San needed more complete water quality data to design any necessary treatment systems.

In 2000, Regional San’s renewed NPDES permit included an annual mercury discharge limit of 5.1 lbs per year and required the development and implementation of a Pollution Prevention Work Plan. This work plan included the following elements.

In 2010, during the most recent renewal of Regional San’s NPDES permit, the Regional Water Board included a lower mercury discharge limit of 2.3 lbs per year and a requirement to continue the Mercury Source Reduction Program.

In 2010, the Water Board adopted a Basin Plan Amendment that included a Sacramento-San Joaquin Delta Methylmercury Total Maximum Daily Load (TMDL). The goals of the Basin Plan Amendment are to reduce methylmercury in Delta fish and reduce the amount of mercury entering the San Francisco Bay from the Delta. There are two phases in the implementation of the TDML. In Phase 1, dischargers, such as Regional San, must maintain their total mercury discharge at or below current levels, implement mercury pollution minimization plans, perform studies to see if methylmercury can be reduced at the treatment plant and participate in an exposure reduction program to protect humans consuming Delta fish.

At the end of Phase 1, the Regional Water Board will review the program and consider, among other things, modification of allocations and limits for dischargers, objectives for methylmercury levels in fish and the possible requirement for dischargers to implement management practices developed in Phase 1. Also under consideration will be the possibility of a Mercury Offset Program for dischargers who cannot meet their discharge allocation.

At this time, Regional San is in compliance with its Phase 1 total mercury discharge limit of 2.3 lbs per year and also meets its proposed 2030 methylmercury allocation of 89 lbs per year.