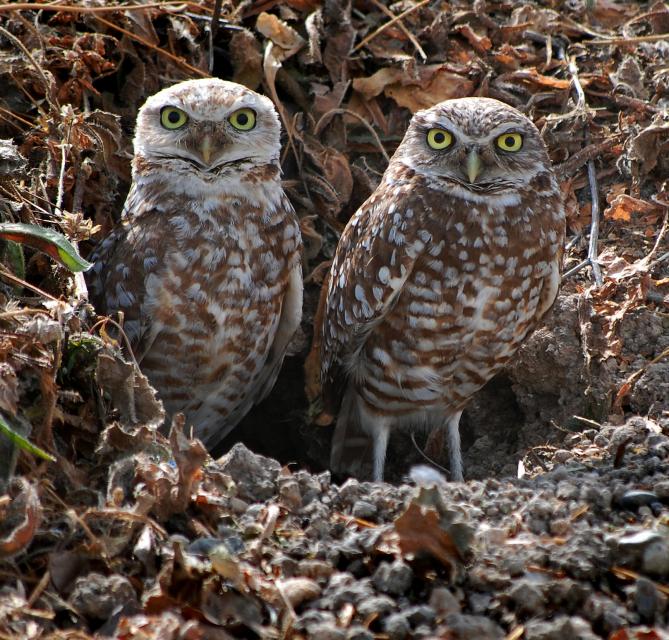 Our Bufferlands provide excellent habitat for one of the Central Valley’s most charming birds, the burrowing owl. Since 1991, Regional San’s natural resources experts have carefully monitored burrowing owl habitat on District lands while pioneering innovative techniques for increasing owl populations. Through hands-on research, Bufferlands staff have successfully developed a way to build artificial nesting mounds for the threatened birds.

The Burrowing Owl (Athene cunicularia) lives in dry open rolling hills, grasslands, deserts and open bare ground with gullies and arroyos. The species is unusual among owls for its level of daytime activity and its relatively long legs. It is also one of the few birds that nests underground, using burrows dug by ground squirrels for protection and shelter.

Once a common year-round resident throughout California’s Central Valley, burrowing owl numbers have been on the decline for the past 50 years. Rapid urbanization and agricultural growth have dramatically decreased suitable habitat for burrowing owls. In addition, concern for levee stability has resulted in decreasing numbers of ground squirrels, thereby reducing the availability of nest sites.

In 1971, the burrowing owl was included in the National Audubon Society’s first Blue List of bird species undergoing non-cyclic population declines and extreme habitat loss. It is presently listed as a Species of Concern in California.

Bufferlands staff have implemented a program to build artificial owl nesting mounds with buried pipe and concrete or plastic valve boxes. The more than 20 such mounds built on Regional San property to date are habitually used by burrowing owls. As a result, annual surveys show that burrowing owl numbers increased from 12 owls in 1991 to more than 20 in 1997, with as many as 38 birds observed in one survey. However, the number of owls nesting on the Bufferlands has decreased in recent years. with only one or two pairs in spring and summer. An influx in the fall typically brings the total up to 5-10 individuals in winter. The population decline appears to be part of a regional trend, caused by habitat loss adjacent to the property, as well as unknown causes.

In the areas adjacent to the new burrows, Bufferlands’ staff use management tools such as mowing and cattle grazing to maintain the short grass habitats needed by this species. Additional management techniques help ensure that adequate insect and small mammal prey are available to the owl population.

The Burrowing Owl’s Fate Depends on All of Us

Today California’s burrowing owl population is clearly in decline. With intensifying pressure to develop the remaining open grasslands, we face the possibility of adding this owl to the Endangered Species List. The efforts of Regional San’s Bufferlands experts demonstrate that by continuing to acquire open land for wildlife habitat, and by properly managing existing habitat, it is still possible to ensure the future of this little owl.