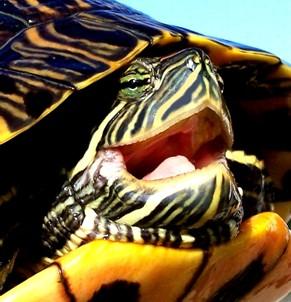 The western pond turtle (Emys marmorata) is a native species found on the Bufferlands and throughout the Sacramento Valley. In recent years, other turtle species have been observed using the Bufferlands wetland habitats. These introduced species include the red-eared slider (Trachemys scripta elegans) and painted turtle (Chrysemys picta). Both of these species are sold as pets and are readily available at local pet shops. There has been much speculation that these turtles may be out-competing our native turtles for resources.

Bufferlands staff has cooperated with a Sacramento State University Master’s student to investigate the population of these introduced species within the Bufferlands property. Comparing life history parameters like growth rate, fecundity, survivorship and sex ratio of the study population with these same parameters from populations within the species’ native range may help elucidate the probability that this population will persist and ultimately spread. The spread of this introduced species may contribute to the decline of the western pond turtle, our only native turtle species. To date, no studies of red-eared sliders in California have been published, so this project promises to provide novel and relevant information about a non-indigenous species that is recognized worldwide as a threat to biodiversity.

From mid-March to early September, turtles were live-trapped using various trap designs. Adult female turtles were palpated to determine reproductive condition, and gravid females were x-rayed to determine clutch size. Transmitters were placed on several turtles to track movements and to attempt to locate nests to monitor success.

During the study, more than 200 red-eared sliders, 10 western pond turtles and one painted turtle were captured, weighed, measured, marked and released.

Field work for this project was completed during 2005 and a Master’s Thesis was completed in 2006. Congratulations to Laura Patterson for completing her Master’s Degree.